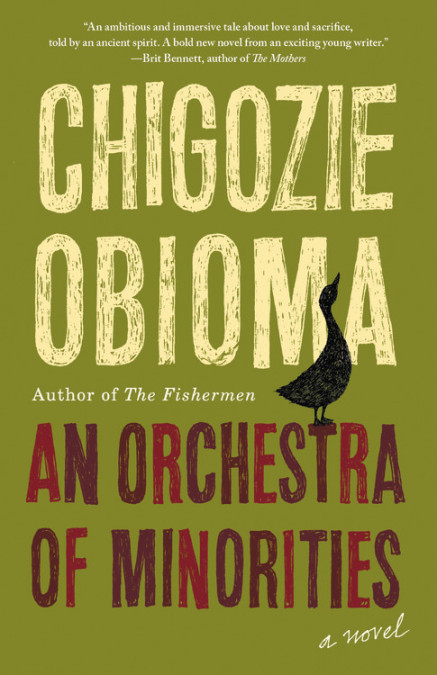 An Orchestra of Minorities
Chigozie Obioma
Fiction
In Store Now!

In Circe, Madeline Miller gives voice to Telemachus, Odysseus’ son. He tells the goddess that his father had led a bad life. Not bad for Odysseus, but certainly bad for those around him. After duping the Cyclops, for example, Odysseus could well have walked away unharmed. Instead, he chose to identify himself.

“Why? For a moment’s pride. He would rather be cursed by the gods than be No one. If he had returned home after the war, the suitors would never have come. My mother’s life would not have been blighted. My life.”

Admittedly, this is a roundabout way of talking about Chigozie Obioma’s wonderful new book An Orchestra of Minorities, but the inside jacket calls this book “... a brilliant contemporary twist on Homer’s Odyssey.”  The narrative itself opens with an invocation to the gods, as any good epic should. The twist is that the invocation, along with the rest of the narrative, is delivered by the protagonist’s chi, which in Igbo cosmology can be understood as “a person’s... other identity in spiritland.”

Immediately, I was hooked.

The story itself revolves around Chinonso and Ndali. They meet on a bridge at night. Ndali is sitting on the railing, looking despairingly into the wash below. In a desperate attempt to prevent Ndali from committing the suicide she seems to be intent upon, Chinonso throws a chicken (he is a poultry farmer) into the river.

It takes some time, but their paths do cross again, and become entwined until Chinonso decides that to counteract the shame that Ndali’s family heaps upon him (her father is a general) he’ll go to university in Cyprus. The plan’s success depends on a friend from high school named Jamike. Chinonso sells his farm, his chickens, and everything else he owns and sends the money off to Jamike, who will fix the passport, the tuition, and the residence payments.

Jamike is a scammer, though he is not the only reason the plan goes wrong.

Knowing when to act and when not to is sometimes not enough. The acts themselves matter, as do the motives

In school we learned that Odysseus was First Among the Greeks, primarily because he knew when to act and when to hold back. It was his wisdom and insight that set him apart. Life isn’t always about confrontation. Sometimes you have to hold your tongue to get what you want.

This book, like Circe, challenges not just the morality of the Odyssey, and of Odysseus, but also the insight. Knowing when to act and when not to is sometimes not enough. The acts themselves matter, as do the motives; but there is something else, too. There are aspects to life that are outside of our control.

Chinonso mimics Odysseus until the end, but it is there that their fates diverge. One story is a triumph, the other a tragedy.

Most importantly, though, this book is stunningly beautiful.  The language will hold you throughout the turbulence Chinonso’s journey. Chigozie Obioma was shortlisted for the MAN Booker Prize for his previous book The Fishermen, which is likewise stunning and heartrending.

Chigozie is also thirty years old. It pleases me to think of all the books of his we have to look forward to.

Rupert is a fan of fabulation in the fiction he reads. He mostly reads classics, but also enjoys science-fiction, and a good adventure story. On the non-fiction side he enjoys books on politics, language, and English history.