We’re lucky these days because there are new books coming out year-round. The 50’s, 60’s, and 2030’s all feature in the book’s we’re looking forward to in the next month.

The Fifties by James R. Gaines 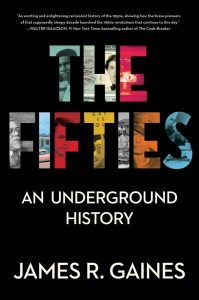 In a fascinating and beautifully written series of character portraits, The Fifties invokes the accidental radicals—people motivated not by politics but by their own most intimate conflicts—who sparked movements for change in their time and our own.

Among many others, we meet the legal pathfinder Pauli Murray, who was tortured by both her mixed-race heritage and her “in between” sexuality. Through years of hard work and self-examination, she turned her demons into historic victories. Ruth Bader Ginsberg credited her for the argument that made sex discrimination illegal, but that was only one of her gifts to 21st-century feminism. We meet Harry Hay, who dreamed of a national gay-rights movement as early as the mid-1940s, a time when the US, Soviet Union, and Nazi Germany viewed gay people as subversives and mentally ill. And in perhaps the book’s unlikeliest pairing, we hear the prophetic voices of Silent Spring’s Rachel Carson and MIT’s preeminent mathematician, Norbert Wiener, who from their very different perspectives—she in the living world, he in the theoretical one—converged on the then-heretical idea that our mastery over the natural world carried the potential for disaster. Their legacy is the environmental movement.

Heiresses: surely they are among the luckiest women on earth. Are they not to be envied, with their private jets and Chanel wardrobes and endless funds? Yet all too often those gilded lives have been beset with trauma and despair. Before the 20th century a wife’s inheritance was the property of her husband, making her vulnerable to kidnap, forced marriages, even confinement in an asylum. And in modern times, heiresses fell victim to fortune-hunters who squandered their millions.

Heiresses tells the stories of these million dollar babies: Mary Davies, who inherited London’s most valuable real estate, and was bartered from the age of twelve; Consuelo Vanderbilt, the original American “Dollar Heiress”, forced into a loveless marriage; Barbara Hutton, the Woolworth heiress who married seven times and died almost penniless; and Patty Hearst, heiress to a newspaper fortune who was arrested for terrorism. However, there are also stories of independence and achievement: Angela Burdett-Coutts, who became one of the greatest philanthropists of Victorian England; Nancy Cunard, who lived off her mother’s fortune and became a pioneer of the civil rights movement; and Daisy Fellowes, elegant linchpin of interwar high society and noted fashion editor.

George III, Britain’s longest-reigning king, has gone down in history as ‘the cruellest tyrant of this age’ (Thomas Paine, eighteenth century), ‘a sovereign who inflicted more profound and enduring injuries upon this country than any other modern English king’ (W.E.H. Lecky, nineteenth century),  and as the pompous monarch of the musical Hamilton (twenty-first century).

Andrew Roberts’s magnificent new biography takes entirely the opposite view. It portrays George as intelligent, benevolent, scrupulously devoted to the constitution of his country and navigating the turbulence of eighteenth-century politics with a strong sense of honour and duty. He was a devoted husband and family man, a great patron of the arts and sciences, keen to advance Britain’s agricultural capacity (‘Farmer George’) and determined that her horizons should be global. He could be stubborn and self-righteous, but he was also brave, brushing aside numerous assassination attempts, galvanising his ministers and generals at moments of crisis and stoical in the face of his descent – five times during his life – into a horrifying loss of mind. 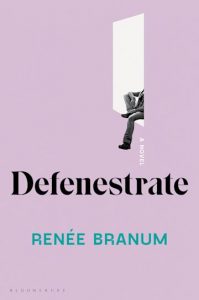 Marta and her twin brother Nick have always been haunted and fascinated by an ancestral legend that holds that members of their family are doomed to various types of falls. And when their own family collapses in the wake of a revelation and a resulting devastating fight with their Catholic mother, the twins move to Prague, the city in which their “falling curse” began. There, Marta and Nick try to forge a new life for themselves. But their ties to the past and each other prove difficult to disentangle, and when they ultimately return to their midwestern home and Nick falls from a balcony himself, Marta is forced to confront the truths they’ve hidden from each other and themselves.

Ingeniously and unforgettably narrated by Marta as she reflects on all the ways there are to fall–from defenestration in nineteenth century Prague to the pratfalls of her childhood idol Buster Keaton, from falling in love to falling midflight from an airplane–Defenestrate is a deeply original, gorgeous novel about the power of stories and the strange, malleable bonds that hold families together.

Cost of Living by Emily Maloney 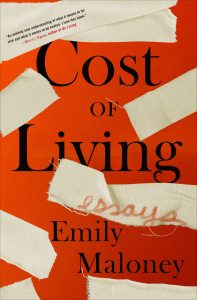 When we fall ill, our lives are itemized on a spreadsheet. A thousand dollars for a broken leg, a few hundred for a nasty cut while cooking dinner. Then there are the greater costs for even greater misfortunes. The car accidents, breast cancers, blood diseases, and dark depressions.

When Emily Maloney was nineteen she tried to kill herself. An act that would not only cost a great deal personally, but also financially, sending her down a dark spiral of misdiagnoses, years spent in and out of hospitals and doctor’s offices, and tens of thousands owed in medical debt. To work to pay off this crippling burden, Emily becomes an emergency room technician. Doing the grunt work in a hospital, and taking care of patients at their most vulnerable moments, chronicling these interactions in searingly beautiful, surprising ways.

After a sudden, devastating loss, Mara flees her family and ends up adrift in a wealthy seaside town with a dead cellphone and barely any money. Mired in her grief, Mara detaches from the outside world and spends her days of self-imposed exile scrounging for food and swimming in the night ocean. In her state of emotional extremis, the sea at the town’s edge is rendered bleak, luminous, implacable.   As her money runs out and tourist season comes to a close, Mara finds a job at the local wine store. There, she meets Simon, the shop’s soft-spoken, lonely owner.

Confronted with the possibility of connection with Simon and the slow return of her desires and appetites, the reasons for her flight begin to emerge.   Reminiscent of works by Rachel Cusk, Jenny Offill, and Sheila Heti, Tides is a spare, visceral debut novel about the nature of selfhood, intimacy, and the private narratives that shape our lives. A shattering and unforgettable debut.

How High We Go in the Dark by Sequoia Nagamatsu 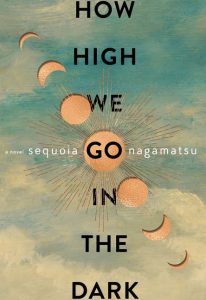 In 2030, a grieving archeologist arrives in the Arctic Circle to continue the work of his recently deceased daughter at the Batagaika Crater, where researchers are studying long-buried secrets now revealed in melting permafrost, including the perfectly preserved remains of a girl who appears to have died of an ancient virus.

Once unleashed, the Arctic plague will reshape life on Earth for generations to come, quickly traversing the globe, forcing humanity to devise a myriad of moving and inventive ways to embrace possibility in the face of tragedy. In a theme park designed for terminally ill children, a cynical employee falls in love with a mother desperate to hold on to her infected son. A heartbroken scientist searching for a cure finds a second chance at fatherhood when one of his test subjects—a pig—develops the capacity for human speech. A widowed painter and her teenaged granddaughter embark on a cosmic quest to locate a new home planet. 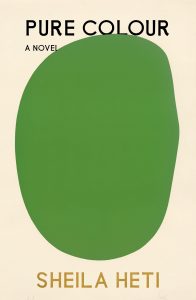 Here we are, just living in the first draft of creation, which was made by some great artist, who is now getting ready to tear it apart.

In this first draft, a woman named Mira leaves home for school. There, she meets Annie, whose tremendous power opens Mira’s chest like a portal—to what, she doesn’t know. When Mira is older, her beloved father dies, and she enters the strange and dizzying dimension that true loss opens up.

Pure Colour tells the story of a life, from beginning to end. It is a galaxy of a novel: explosive, celestially bright, huge, and streaked with beauty. It is a contemporary bible, an atlas of feeling, and a shape-shifting epic. Sheila Heti is a philosopher of modern experience, and she has reimagined what a book can hold.

When We Lost Our Heads by Heather O’Neill 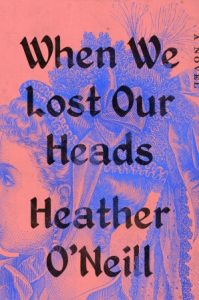 Marie Antoine is the charismatic, spoiled daughter of a sugar baron. At age twelve, with her pile of blond curls and unparalleled sense of whimsy, she’s the leader of all the children in the Golden Mile, the affluent strip of nineteenth-century Montreal where powerful families live. Until one day in 1873, when Sadie Arnett, dark-haired, sly and brilliant, moves to the neighbourhood.

Marie and Sadie are immediately inseparable. United by their passion and intensity, they attract and repel each other in ways that set them both on fire. Marie, with her bubbly charm, sees all the pleasure of the world, whereas Sadie’s obsession with darkness is all-consuming. Soon, their childlike games take on the thrill of danger and then become deadly.

Each woman will play an unexpected role in the events that upend their city—the only question is whether they will find each other once more. 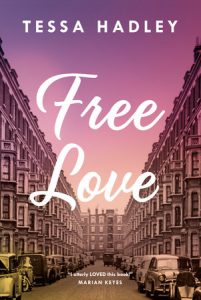 1967. While London comes alive with the new youth revolution, the suburban Fischer family seems to belong to an older world of conventional stability: pretty, dutiful homemaker Phyllis is married to Roger, a devoted father with a career in the Foreign Office. Their children are Colette, a bookish teenager, and Hugh, the golden boy. But when the twenty-something son of an old friend pays the Fischers a visit one hot summer evening, and kisses Phyllis in the dark garden after dinner, something in her catches fire.

Newly awake to the world, Phyllis makes a choice that defies all expectations of her as a wife and a mother. Nothing in these ordinary lives is so ordinary after all, it turns out, as the family’s upheaval mirrors the dramatic transformation of the society around them. With scalpel-sharp insight, Tessa Hadley explores her characters’ inner worlds, laying bare their fears and longings.

Daring and sensual, Free Love is an enthralling, irresistible exploration of romantic love, sexual freedom and living out the truest and most meaningful version of our lives.